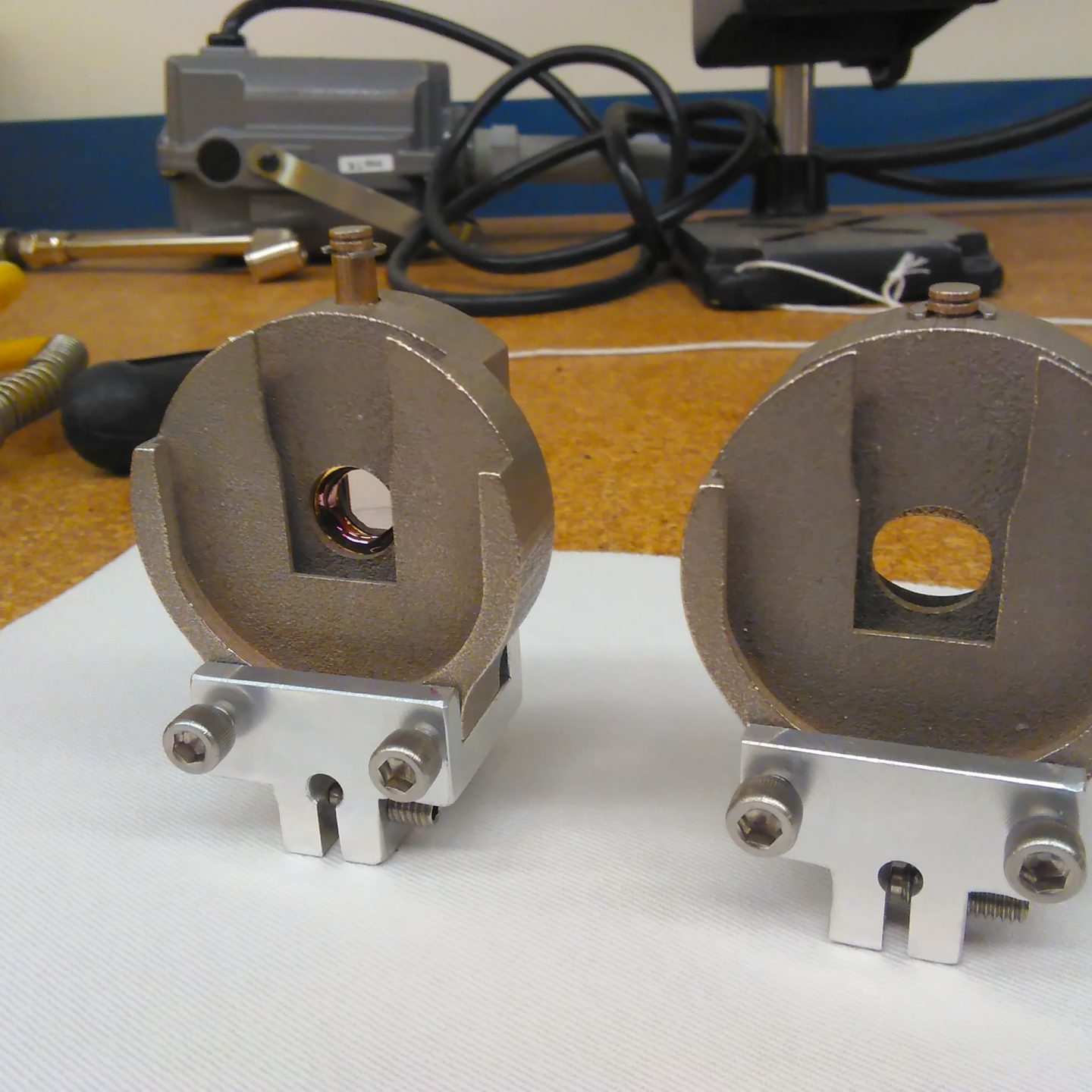 This project was spawned because of two factors;

The first was this holder required a feature that would be quite challenging and time intensive for a machinist to produce. The feature in question is the deep slot which will hold the tantalum aperture in place. Though it is possible to use a slitting saw to make such a slit, the design required a deep and narrow slit which would require custom tooling. Ultimately this would lead to a high-cost per part, so we opted to try different fabrication methods available.

The second was to determine the viability of low-cost 3D Metal printing for use in Ultra-High Vaccum (UHV). The ability to rapidly prototype and side step the large queue for machinist time for smaller projects was a driving factor to testing this process out. So one of the objectives was to determine if there were any major downsides to this process, and to document any major issues that cropped up in design due to the processes used to manufacture the parts.

The design of the SBD holder is centered around 3 key components, (1) holding an SBD which is a simple cylinder shaped can, (2) holding a tantalum aperture at a fixed distance from the front of the SBD, (3) have a foot that can be expanded using a screw to allow for the SBD holder to sit in a track and be positioned at various distances from Target Chamber Center (TCC) and then locked in place. The first two design requirements were easily met with a custom fixture and a spring loaded plunger which holds the SBD carefully and firmly into place. The third requirement ended up causing a few redesigns before a final design was settled upon. To note, there are two types of SBD holders, one that can hold a standard piece of CR-39 in addition to the other components and one that cannot. The CR-39 holder allows us to field a piece of CR-39 alongside the SBD to allow us to verify the quality of the data coming from the detector.

The issues that cropped up regarding the 3D designed component revolved around the material and fabrication processes implemented by shape-ways. Specifically the material (Stainless Steel – variant) is machinable by conventional methods (milling) but when tapping the material it tends to not properly cut and therefore has a high likelihood of breaking the tap. This was one of the major issues that first cropped up in our design, sadly it took more 2 broken taps to determine we had to re-approach how we were dealing with this issue. Initially we thought that because it was stainless steel it was harder to tap, but we ended up concluding that the way the material is fabricated changed the properties of the material causing an inconsistency in the material itself. One of the solutions I came up with was to simply remove the foot from the holder itself and create a holder-holder which I dubbed the SBD holder foot. This is simply a mating method to allow for the complicated parts to be fabricated using the metal printing and the simple ones to be conventionally machined. To test this design I cut off the foot and milled a flat on the base of one of the SBD holders with a broken tap, and then made an SBD foot out of 6061-Aluminium. Ultimately this approach was successful and led to the final design of the SBD holder. It is important to note that distance of the face of the detector to TCC is vitally important to the validity of the acquired data so the feet are designed in a way to (1) affix the holder in a very specific position, (2) allow for a fiducial on the front of the foot which can be used as a reference point for distance measurements.

As for the UHV compatibility of the material, we approached it in a basic fashion: We put the parts under vacuum and track the speed at which we were able to achieve UHV, which we then compared with our standard time required to put our accelerator chamber on UHV. Once we were satisfied with this, we closed off the chamber from the vacuum pumps and left the system in UHV over the weekend to see how much the material off-gassed over an extended period of time. Through these two tests we determined that for our application the 3d printed stainless steel metal is acceptable material for UHV compatibility, but requires some extra time for it to off-gas when first put in the chamber.

In the end our general consensus for Shapeways 3D printed stainless steel was that the material is promising for specific uses, but when conventional machining is efficient and can be used to fabricate the necessary parts then it should be used. Conventional fabrication methods are much more robust when dealing with material compatibilities, but in cases where it is prohibitive to use those methods it is possible to use 3D printed metal as a stand in.