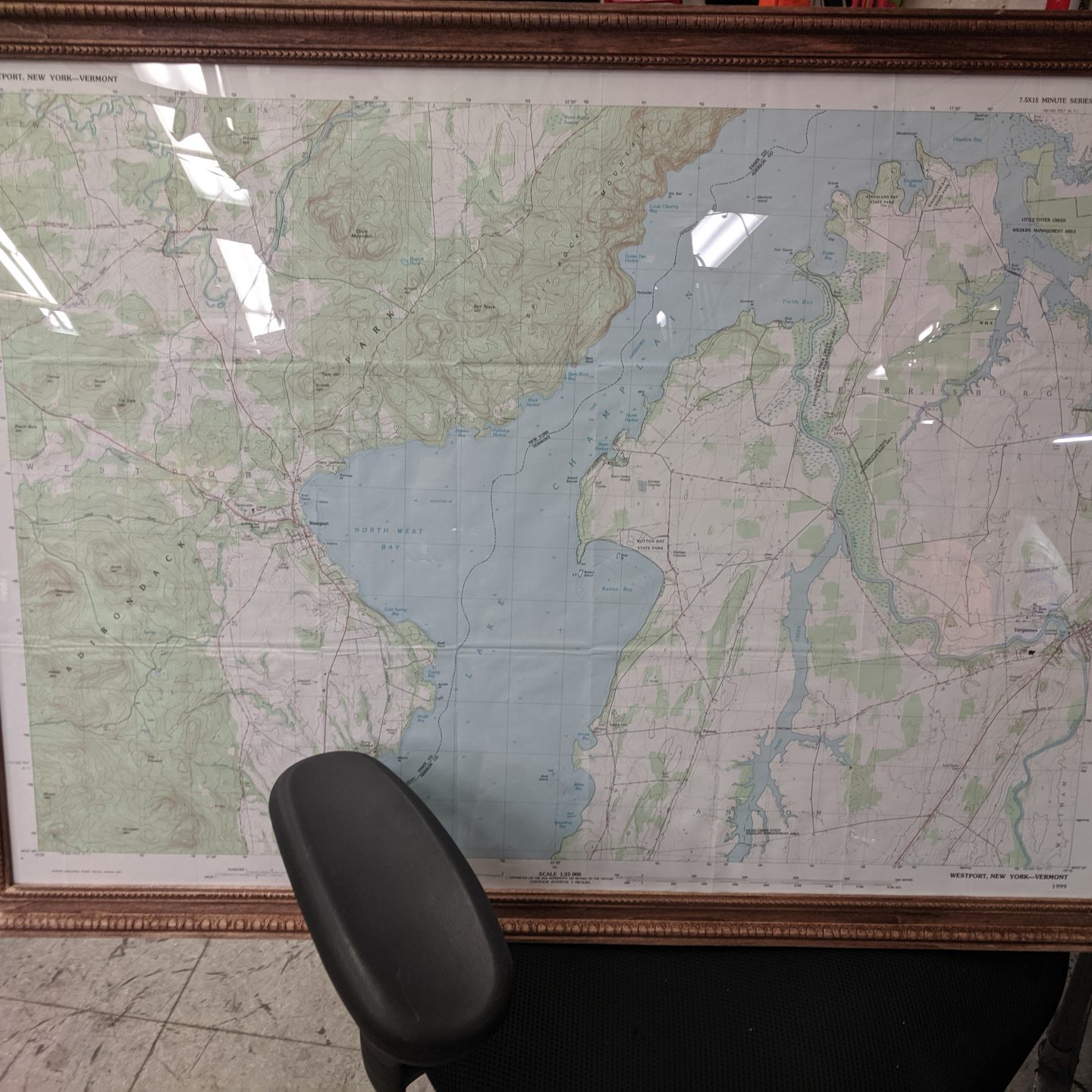 For this project I decided to create a custom wooden picture frame with a topo-map of upstate New York for a friend. To start off this project, I did some searching through the USGS store for a map that I thought my friend would like. From this I was able to determine the dimensions I needed the frame to be.

An interesting fact I didn’t know before starting this project is that you can actually buy picture frame siding at so many different stores. So I went to home depot, and bought two lengths of ~7ft picture frame siding that I liked. And I think the cost was something like $18 which I thought was absurdly cheap compare to the prices I have heard quoted from picture frame stores that make custom frames.

So after I got the frame material, I needed to cut the frame pieces to size with right angled cuts. The obvious tool for this was a Miters saw, so I headed on over to MITERS to use the Miters saw. In a odd turn of events, it turns out our Miters saw was battery powered and someone threw out the battery. So I took a hiatus from this project to rectify the inability to turn the saw on (See the repair project I posted about wiring a saw running off a D.C. power supply — Not crazy complicated, but a nice project none the less). So once that was done, I came back and cut the pieces to size.

Now came the gluing, my initial plan was to carefully glue the corners together and clamp them tight with 4 large wood clamps. This turned out to be a chaotic mess with me eventually throwing in the towel. But before I completely scrapped this project, my persistence kicked in and I said… “No, I am going to make this work, and if it looks ugly… then and only then will I throw this project out the window!.” So stubbornly I dug some small finishing nails out and attempted to affix the frame pieces together. But I failed with the smallest finishing nails I had access to, so I went up a size and it worked perfectly… or at least almost perfectly, I had a bit of splitting caused by the nails. So with a combination of a bit of glue and finishing nails… Then I came across Picture Frame nails… which are designed to be nailed in the corners on the backside of the picture frame to hold the pieces together. So next frame, I am definitely doing that!

Next I stained the frame with a darker color and let dry. I then got a piece of custom acrylic cut and sourced from a local supplier for (~$20) for the front pane. For the backing plate, I acquired a nice piece of black poster board and then cut both the poster board and the map to size. Mounting the topo-map and the poster board into the frame after it had dried. For this I used some custom picture frame nails for holding glass in place. Finally I used a hanging to setup the frame for easy mounting when given as a gift.

Things to note for future frames:

(1) get framing nails specifically for assembly.

(2) look for a better way to make a backing plate.

(3) Definitely use acrylic again, its super clear and compared to glass its quite light weight.

(4) Don’t use wood glue, it messes with the stains ability to seep into the wood. So it causes discoloration