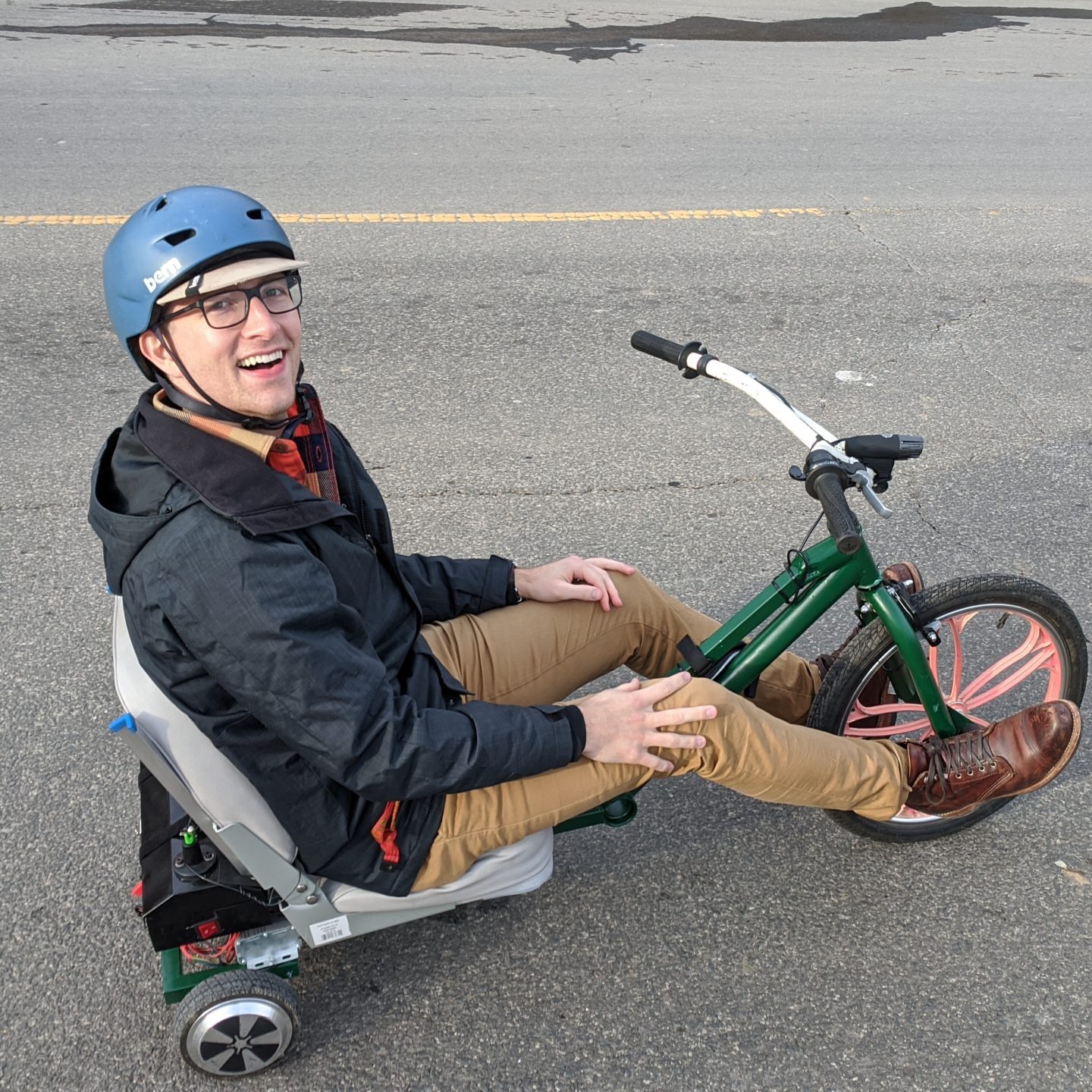 In MITERS we have a tradition of building electric vehicles and riding them around campus/cambridge for fun. This projects goal was to create a comfortable, peppy, and robust electric trike while also limiting its top speed for safety.

The general design requirements of this electric vehicle; ~20 MPH top speed, Can be stored in my apartment, Robust against abuse, Easy to repair, Long range, comfortable. And most importantly, fun!

Comfort; One of my biggest complaints with long rides on my previous electric scooter and my friends electric vehicles is comfort… most designs focus on speed and ability to ride it and less about ergonomics(See group project DOOMSLED: https://transistor-man.com/doomsled.html). I was determined to make something with some comfort so that I didn’t feel sore after taking it out for a spin. So I started where the ‘rubber’ meets the road… The seat. Unfortunately all racing seats are a pricey for the budget of this project, but with a bit of outside the box thinking I came started to look into alternative ‘replacement seats’… and found the folding boat seat for 1/2 off on amazon. It came with a standard spacing bolt pattern which made adapting it a piece of cake. Second… Ergonomics. It can be said that I have no idea how to properly do ergonomics, but I do have a background in experimentation… So with seat in hand, I went about experimentally designing the frame (see in the pictures below).

Robust & Easy to repair; Another important lesson learned in the hellfire’s of MITERS is the simple truth that everything breaks when you most want to use it. So to reduce the likelihood of constant cropping up failures I made certain design choices in both Mechanical and electrical. First, the mechanical choices: (1) I did not attempt to reinvent the wheel, instead opting for cannibalizing a sturdy steel bmx bike frame. (2) The back half of the frame was all sturdy square steel tubing. (3) the wheels; Front wheel is a cast aluminum wheel and the back wheels are hoverboard electric wheels which can be found for a reasonable price on ebay (All 3 wheels can be hot swapped). Second; Electrical. Going with a similar design philosophy, I build around easily replaceable low-cost chinese E-Bike controllers, 1 per wheel. Both controllers are mounted on rubber feet to reduce shock damage to the internal components. Finally The throttle cable assembly can be easily swapped out if the throttle dies. So Generally no frills in the electrical department… until, of course, when I decided to add a 12v DC-DC converter for LED lights, but due to it being run in parallel to all the drive electronics it does not impact the reliability of the vehicle.

20 MPH, Long range, And Fun. To accomplish these goals, it took a bit of testing with the motor controller and wheel. But I was able to limit the max speed to roughly ~20MPH by limiting the voltage I ran the controllers at. Due to the reduction in voltage, I was able to dedicate more cells to being parallel than in series when laying out my pack. (Simply put, the more cells in series, the higher the voltage of the pack. The more sets in parallel, the higher the capacity of the pack). Initially I ran two lipo hobby packs together in series to achieve my desired voltage, but a friend with a bountiful harvest of nice cells from a donor to the EV car team at MIT, I was able to layout and weld a dedicated pack for the trike. Not only are these cells better than anything I care to purchase myself, but they have a higher capacity and discharge rate than the cells I had previously been using. This led to the trike having more of a kick when starting from 0 MPH, as well as having quite the insane amount of capacity and range due to the combination of the nice battery and efficiency of the hoverboard wheels.

Finally, Storing in my apartment… well I really forgot about this requirement when building this electric trike due to it being stored in MITERS while I was working on it. Luckily for me, previous design choices all came together that allowed me to store the trike under one of my workbenches in my apartment. (Foldable seat and foldable handle bars).

All in all, this project was a great success, though I wish COVID didnt happen so that I could have taken some fun jaunts around campus with my friends and their electric vehicles.